Down Memory Lane - Remember When 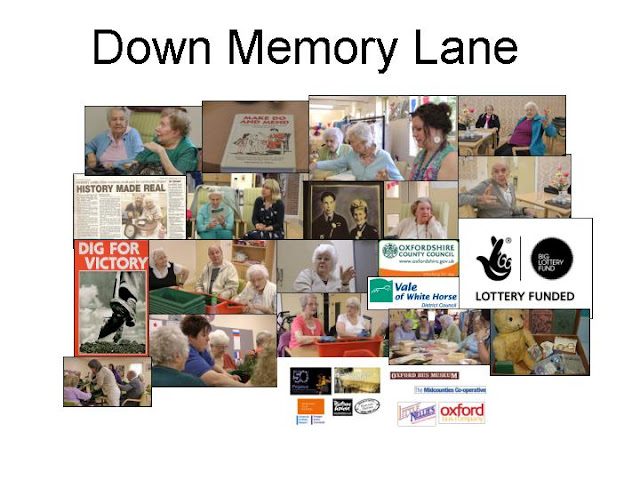 A lot has been going on since I last posted workshops, discussion groups, creative art, filmmaking and promoting.

Down Memory Lane work is getting noticed.

Thanks for drawing this to my attention, and
all the best with this work.
The conversations you record enrich our
communities. I am pleased they are
inspiring other activities too.
Andrew Smith MP

Helen Fountain Reminiscence Officer for the City visited ‘Down Memory Lane’.
She spoke about Morris Motors and the old Pressed Steel plant. Doris Burton
remembered her time working at the plant during the War when it was an  ammunitions factory.

Make Do And Mend with Helen Jacobs
Workshops started this month with Artist Helen Jacobs . Felt making with themes from make do and mend.

Pupils of St Helen’s also joined in the session as part of the Duke of Edinburgh Awards.

Dig For Victory with Isla Goldsmith & Thrive
It was time to get your hands dirty and look at how growing your own helped
through the War years. Thrive looking at the history of gardening and the ‘Dig For Victory’ Jan recalls that when War was declared all the flowers went from the garden and the vegetables came in. Soot was dried from the Chimney to put on the garden along with other products from day to day use.

6) Down Memory Lane with the Brownies – (1st Drayton Brownies join the Centre to
remember social clubs (Brownies, Guides, Scouts and Girls Life Brigade), activities
and games as well as celebrating their own anniversary of 55 years)
Film Click Here: Brownies How was life for you

7) Down Memory Lane - (Remembering the hard facts of War - contains images of concentration camps) We wanted to remember those who survived and those who did not.
Film Click Here: Memories of War 1939 -45

We would like to thank those individuals and organisations for supporting this
project. Through time, volunteering, equipment, resources, publicity or for directly
taking part in this important Oral History, Reminiscence and Archive Project for
future generations.

Exhibition will take place on the 22nd September

Thank you to Helen Jacobs and Isla Goldsmith for the ongoing workshops. We will have visits from Cait Sweeney and Nick Gill who will be giving us a sing-a-long as well as looking at the Stars from the Golden Screen. We have objects and memories with Cait Sweeney, Gill Munday – Reminiscence from the County Museums and cinema with screenings of feature films and showing some of the films we have made to date.